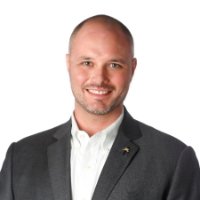 Corey grew up in Fort Lauderdale while spending summers on his family’s dairy farm in Alabama. After graduating high school, he joined the Army and served with 3rd Ranger Battalion. Following a distinguished military career with the Rangers, Corey went to Culinary School at Johnson & Wales University. After graduating Magna Cum Laude with a degree in Culinary Arts, he went on to work for resorts and hotels across South Florida. It was at one of these resorts, PGA National Resort & Spa where he got the health and fitness bug. Advancing his career in the health and fitness area is what led Corey to enroll at Florida International University as a Dietetics and Nutrition major, minoring in Exercise Science.

After earning a Bachelor’s degree from FIU, Corey applied his nutrition and sales knowledge as Certified Personal Trainer. He  received his Certification as a Performance Enhancement Specialist, giving him the title Master Trainer with 24 Hour Fitness. He opened the first Palm Beach location, as well as seven more locations from Miami to N.Y.C.

After getting a taste of the business operation side, Corey pursued his MBA at Palm Beach Atlantic University. He then joined Merrill Lynch as a Business Development Financial Advisor. Because of his love of building sales process, he started High Goltage Consulting. Corey currently works with CleanMark, a commercial janitorial services company, as well as a local small business in South Florida.